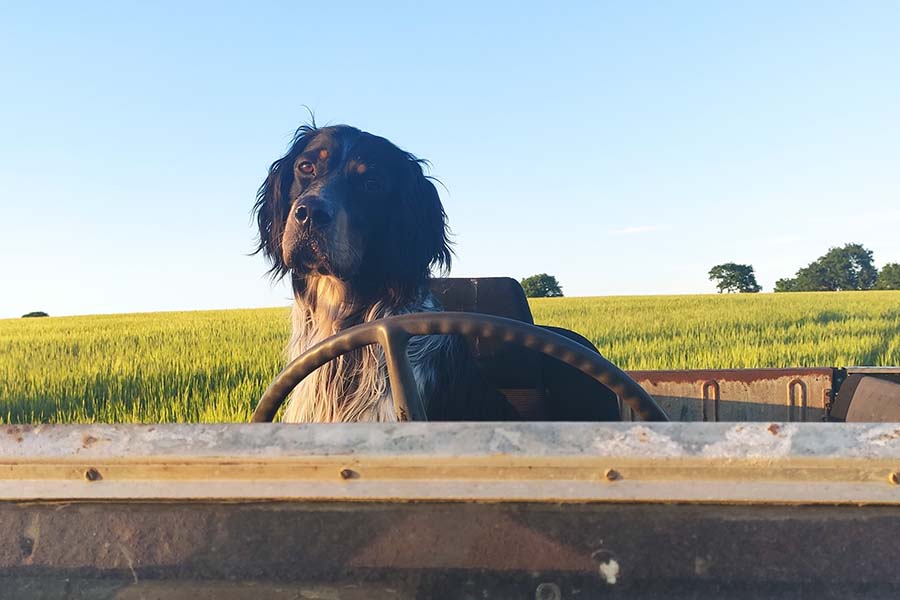 Well probably not, but he’s heading that way. If he was a child his father would be Willy Wonka and he would live in a restaurant on a theme park and be chauffeur driven in an Aston Martin, have a cinema to use as his Play Station and fizzy drinks on tap.

This is Stanley the English Setter. He lives on Elston Farm in Devon. His owner/servant owns the farm, Stanley has the freedom to sit in the fields at night and bark at the moon, chase rabbits, point at birds and woof at cyclists. The farm has deer on, he isn’t allowed to chase them, but he can make friends with them. Weirdly, he tends to do this, along with the sheep. He will sniff them and then lick their noses and they take it. The cattle are a different matter, they just can’t help themselves, they chase Stanley, he dives under a gate or jumps in the pond as an escape.

More exciting for any dog is, the owner/servant also has a butchery and alongside this a dog meat factory. The butchery sells top quality prime cuts of fresh meat to the public through www.themeatboxcompany.co.uk and the bones and bits that are exciting to dogs are sent to the nations discerning dogs who like this sort of thing. Stanley obviously tests all these products before launching and then carries out ongoing quality control checks, morning, and evening. The fresh meat is mixed with an inspiring, nutrient rich, flavoursome balance of offal and bone before mincing and freezing. It seems to work for Stanley, he loves the stuff, his coat shines and he has enough energy to gallop aimlessly around the farm or purposefully (but unsuccessfully) chase rabbits).

Stanley has many other delights in his life, he shares his house with an orphaned Jackdaw called Orpheus, pictured here. Orpheus checks Stanley out for fleas and generally pokes about in Stanley’s coat looking for stuff. Stanley travels around the farm and locality in an open topped Land Rover (also pictured, looking like Monty), which saves him having to put his head out of the window to sample the passing air for fast forwarded smells that whizz past his nose.

His nights are spent hoping someone will drop something from the dinner table and then sleeping in front of an aga, what a life!

Is Stanley the eponymous Farmer’s Dog? The muse and inspiration behind the brand? Well maybe, he is certainly a dog owned by the farmer and his healthy, energetic, chilled and fun lifestyle is what the brand epitomises. Raw meat is Stanley’s daily bread and he must be pretty hungry to eat anything else. His favourite? He likes all the types and he likes a variety, sometimes he says, too much chicken, time for beef. Sometimes the lamb starts to put weight on him, so he goes for a slimming venison.

Maybe not the luckiest, but probably one of the happiest.

We use cookies on our website to give you the most relevant experience by remembering your preferences and repeat visits. By clicking “Accept All”, you consent to the use of ALL the cookies. However, you may visit "Cookie Settings" to provide a controlled consent.
Cookie SettingsAccept All
Manage consent

This website uses cookies to improve your experience while you navigate through the website. Out of these, the cookies that are categorized as necessary are stored on your browser as they are essential for the working of basic functionalities of the website. We also use third-party cookies that help us analyze and understand how you use this website. These cookies will be stored in your browser only with your consent. You also have the option to opt-out of these cookies. But opting out of some of these cookies may affect your browsing experience.
Necessary Always Enabled
Necessary cookies are absolutely essential for the website to function properly. These cookies ensure basic functionalities and security features of the website, anonymously.
Functional
Functional cookies help to perform certain functionalities like sharing the content of the website on social media platforms, collect feedbacks, and other third-party features.
Performance
Performance cookies are used to understand and analyze the key performance indexes of the website which helps in delivering a better user experience for the visitors.
Analytics
Analytical cookies are used to understand how visitors interact with the website. These cookies help provide information on metrics the number of visitors, bounce rate, traffic source, etc.
Advertisement
Advertisement cookies are used to provide visitors with relevant ads and marketing campaigns. These cookies track visitors across websites and collect information to provide customized ads.
Others
Other uncategorized cookies are those that are being analyzed and have not been classified into a category as yet.
SAVE & ACCEPT